The Importance of Production, Savings, and Investments: A Tale of Two Islands 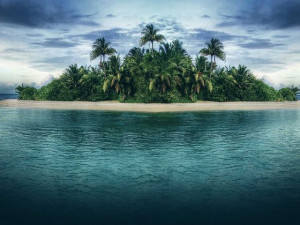 Imagine a group of ten people getting stranded empty-handed, but with enough fresh water to last them a week or so, on a remote island they decide to name Prosperity Island, or Prosperity for short. A few miles south, another group of ten people get stranded on another island, identical to the other island in all aspects. Like the other group, they arrive empty-handed, except for having enough water also lasting for a week. This group names the island Poverty Island, Poverty for short. Both groupsâ€™ consolation price is that both islands have plenty of fish in their waters and coconuts grow in their plentyâ€™s up in the treetops. After a quick trip in the nearby surroundings on the islands, the two groups decide itâ€™s time to catch some fish as all are getting hungry. Without any tools, they jump into the water to catch fish with their bare hands. After the initial scare, the fish returns to the shores and the two groups are able to catch just enough fish to satisfy their hunger.

The next morning the group on Prosperity decides to wake up early and hunt hard all day to catch enough fish to last them a couple of days. The goal is to free up enough time to build some landing nets, a much more efficient way of catching the slippery fish. On Poverty, the group lays no plans and continues to catch fish by hand after a long nightâ€™s sleep while waiting for happier days to arrive in the form of a rescue. On Prosperity, fishing is not going as well as planned, but they end up with enough fish to last them a day and a half. As it would take two days to build the landing nets, they decide to restrict their consumption of fish so that the fish saved will last for a full two days.

Two days later, the nets are completed and all the previously caught fish has been consumed. They go to bed satisfied, though the hunger is starting to creep in once again. On Poverty, life goes on as has now become usual, catching fish by hands to satisfy the hunger for that day.

The sun arises once again and the group settled on Prosperity is eager to try out their newly built tools for catching fish. And itâ€™s a winner! After just two hours of work, they have caught enough fish to feed them for the next four days. After celebrating with a few hours of satisfying a most pleasant want, leisure, they decide to make a ladder to enable them to get to the top of the trees to collect coconuts. Their water supplies will run out in just three or four daysâ€™ time and now is the time to start preparing. Meanwhile, on Poverty Island, life goes on as usual, catching fish by hand. The better days are yet to arrive as there is no rescue boat in sight.

Two days pass and both groups will run out their original water supplies during the next two days. The people on Prosperity have saved up enough fish to last for the next four days and have collected plenty of coconuts filled with rich coconut milk which will quench their thirst at least for another four days after their original water supplies run out. The story is not so plenty on Poverty Island. They have not saved any fish and have not collected any coconuts, and now theyâ€™re about to run out of water supplies. Theyâ€™re left with no other choice than skip fishing, build a ladder and starve for the next two days, the time it takes to build the ladder. On Prosperity, the group has increasingly become tired of sleeping on the ground as it gets quite cold and moist at night. This has resulted in two people taken ill on both islands, which has made it harder than otherwise for both groups to feed themselves.

Two days later, the Poverty group has now built the much needed ladder and waste little time in getting to the top of the trees to pick some milk-packed coconuts. As their water ran out a few hours ago, theyâ€™re now very thirsty in addition to being starved as theyâ€™ve not eaten for two days. Having quenched their thirst, theyâ€™re now exhausted. But since theyâ€™re starving, the people not taken ill get into the water to catch some much needed food. Over on Prosperity, the group has now completed building a very small and simple, but comfortable hut, lifted off the ground and padded with isolating soft leaves and straws.

Another week has now passed, and life is becoming increasingly pleasant on Prosperity Island. They only spend a couple of hours a day catching fish as theyâ€™ve built more landing nets. Also, the two that were previously ill and unable to work have now fully recovered as they sleep above the cold and moist ground. Fetching coconuts is the simplest of tasks, though they had to spend half a day repairing the ladder the other day. As they had saved up both plenty of fish and coconuts, the half day spent repairing the ladder didnâ€™t set them back much. Theyâ€™ve since started building a canoe as theyâ€™ve spotted an island in the horizon they would like to explore. Matters are becoming increasingly worse at Poverty and the inhabitants are starting to wonder whether the name they gave to the island have turned out to be a self-fulfilling prophecy. Four more people have taken ill due to the cold and moist ground they all sleep on, leaving just four people to catch the fish they need to eat every day. Also, as the ladder was in a state of much needed repair, it also took longer to collect the coconuts for a few days, a task normally completed in a very short time every day whenever they can find the time. The ladder was eventually repaired by the few left capable of working, but this was at the expense of catching fish. As a result, they all went without any food at all for a few days. Many on the island have started running out of hope, spending much of the day complaining about their unlucky destiny and the lives they could have had if only things were different. Why hasnâ€™t anyone come to rescue us they ponder. Do people not care?

Back to Prosperity Island. More than a month has now passed since they first stranded on the island. Theyâ€™ve now built three new huts giving all more privacy and space. Theyâ€™ve also built a nice porch in the middle of the small community where they all join at night to spend some quality time together while laying out plans for the next days and the future. The canoe has been built and is ready for its maiden voyage. They face two problems however; theyâ€™re getting tired of eating and drinking the same things every day, and theyâ€™re having so much spare time theyâ€™re getting bored. The group decides to send out a small team to explore the island they inhabit in detail to see if they can find something else eatable on the island. A couple of the people who complain they shouldâ€™ve fully explored the island earlier decide to get their heads together to find new ways to spend their leisure time.

A few days later, the group on Poverty has not eaten since breakfast yesterday. Of the ten people, seven are now ill or in poor condition, leaving just three to sustain the group. As they havenâ€™t had the time or the resources to repair the ladder which by now is completely broken, theyâ€™re becoming desperate for a zip of coconut milk. On Prosperity, the team sent out to explore the island has found a spot on the other side rich in not only berries, but also bananas. Theyâ€™ve also saved enough fish and coconuts to sustain them for a long time and so have more than sufficient reserves in case of disaster. The time is now ripe to put the canoe to work and explore the island in the horizon as theyâ€™ve now also built paddles. Three of the group members jump reluctantly into the boat bringing with them a five days of supplies , well aware of the risk the adventure entails. But they agree itâ€™s worth it.

All hope now appears lost on Poverty Island. The few people busy feeding the group are becoming worn out and discouraged, not completely unrelated to their realisation that some people in the group are not really ill at all. One got so fed up hearing about their complaints and how hungry and thirsty they were that she left the group and settled by herself on the other side of the island. Later that day, while lying half asleep in the shadows near the beach, a member of the Poverty group stands up glazing towards the ocean. What is that, there is an object of some sort moving out there! They all stand up. A few minutes later it all becomes apparent. Itâ€™s a boat! As the trip was substantially shorter than the Prosperity team initially thought, they arrive on Poverty Island with plenty of supplies, enough for a meal for all with a nice big drink of warm coconut milk. After the meal and having shared their stories, the Prosperity team invites the whole group to come and join them on Prosperity Island. We have it all set up there, they explain, we only need to build a few more huts and fishing nets and maybe another ladder. Itâ€™s perfect, with more people we can get started on some more projects weâ€™ve been considering.

After paddling back and forth, all Poverty members arrived safely on Prosperity Island two days ago. The fish and coconut reserves have now been depleted however having been shared between more people and as there were many stories to exchange (and as no work was done for the last two days!). As a result, the Prosperity people cut down on leisure to replenish the reserves and with the help of a few of the people from the Poverty group, they save up enough reserves for all. Over the next weeks, more huts are built, they members of Poverty previously taken ill recover, and the porch for the evening get-togethers is doubled in size. One of the previously demoralised members of Poverty have even set up his own little bar where he serves his newly-invented refreshing blend of coconut milk and berries for the sober price of one fish!

As they were never rescued, they all lived happily ever after instead on Prosperity Island, taking frequent holiday trips to Poverty Island where they had since developed a resort with two luxurious bungalows. The resort is today owned and run by the disserting member of the Poverty group. She paid for it with one of her earlier inventions, the wooden semi-automatic fish rinsing machine. These days however she gets the majority of her fish, berries and coconuts through exchanging high quality, crisp fresh water generated from her newest invention: the saltwater to freshwater distilling machine.